This is the ever-present reminder that technology is both a product of the society that produces it and a key agent for its change. 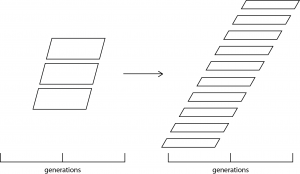 Figure 1: The changing volume, velocity and variety of data with digital technologies

The volume, velocity and variety of data within our everyday lives has now accelerated processes within advanced democracies that the pace of social change is now clearly evident within the span of a single generation rather than between generations

A key reason for this acceleration is the increase in our collective shared memory, both in terms of quantity of events remembered and the length of time an event is remembered.  (Go back to my discussion on writing as the first step in increasing our collective Shared Memory.)

With the popularisation of the use of digital technology, there are more sources of news.  Today everyone with a cellphone can be a reporter.

In my discussion on the 5 Information ages I mention that one of the criteria I use is “who controls the information.”  In the days of writing, because there were so few literate members of the community, the powers that be in the communnity could easily control what was distributed.  The printing press was the first nail in that coffin.  Anyone with the money could buy a printing press.  The powers that be could’t control the “press.”

The surrender to this reality was the US Constitution that ordered the Powers that be to lay off the Press.  They, the founding fathers, particularly Madison and Franklin, understand the power of informaiton.  And they believed the more the better.  They were not wrong.

The digital age has created the ability for everyone to a publisher and have publish whatever I wish..

There are still filtering agencies.  In the printing press ages a community might have a couple of news papers and the Church publishers as being the source of information.

control has now been shifted into the hands of technology companies – who primarily function as advertising companies.

Control has become subtler and is now noticeably less mediated.

The movement of control away from traditional media and the significant mediating influence that it once provided has resulted in the persistence of political extremes and the loss of any stabilizing political hysteresis effect (figure 3).

The traditional media’s loss of authority in the face of social media channels has also had the effect of giving equal weight to “alternative facts,” “fake news,” parody and viral content as much as journalistically-curated news. 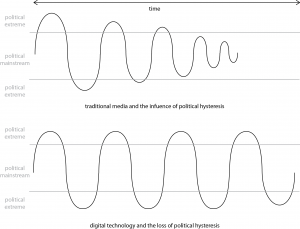 Situationist theory and especially DeBord’s (1994) speculative essay on the “Society of the Spectacle” is the conceptual starting point for fractal politics.

However, an ahistorical event-driven society also prompts re-examination of Fukuyama (1992) and Derrida (1994) and their view of societal and political developments within capitalist economies alongside their critics. The arguments clustered around the label of post-politics and including, for example, Beck (1989) and Žižek (1992), also become problematic in, but prognostic of, current circumstances.

The argument presented here is that digital technology does not make politics impossible. Instead the claim being made is that technology has irrevocably changed the meaning, experience and processes of politics within advanced capitalist economies. This change is not subjectively “better” or “worse” but rather – and more simply – “different”.

The analogy of fractal politics with the world of mathematics does not extend as far as any form of quantifiable certainty but instead draws inspiration from the derivation of the original term and its association with the concept of fragmentation.

The certainty once offered through comparison with historical actions has now been lost amongst the variety, velocity, and volume of more recent data that are all simultaneously and immediately accessible. The result is a nearly infinite potential combination of information that can be brought together to service any position in any argument.

By the early 20th Century, formal politics was shaped by the certainty of bipartisan party politics in advanced economies where it had become standard.

Irrespective of any association with a party, all political activities came to be defined through a binary with alternatives merely representing extremes of two dominant options. Politics and political opinion was contextual – international, national or local – labeled as being left or right.

Political parties were either in power, the opposition or irrelevant. Periods of coalition in parliamentary democracies also revealed periods of instability or, at best, nervous stability. Only during periods of extreme political oppression when a single political agenda obtained complete, or near complete, dominance was this political duality fully broken – with disastrous and often genocidal results.

By the second half of the 20th Century, a stream of media events continued to capture the political logic of binary oppositions. Television and radio reported politics as a separate news item discrete from business, entertainment and general items. This separation was a convenience that was crafted to fit broadcast formats. This packaging of politics is seen repeatedly.

Parliamentary elections provide regular popular events that attract community input.   The most common public experience of politics was a televised “first to the line” competition that draws heavily on sports commentary.

As we moved into the 21st Century the politics of parliamentary democracies have increasingly become a series of disconnected events.

Political activity and thinking is now communicated to online audiences through ‘friends’, ‘friend of friends’ and ‘followers’ with the response to each event now running unmediated through combinations of “public” and “private” channels.

Such complexities now mean that the underlying logic for each event will regularly run contrary to expert predictions based on their evaluation of public channels.

Fractal politics is enabled through two-way personalized social media, is practiced (in the multiple meanings of the word) through reality television voting as well as online consumer ‘polls’ and encouraged by attention-based consumerism. In this way the consumerism of advanced capitalism has effectively recuperated mainstream politics to becoming just some events among many others.

Self-similarity and the mimetic politics of self

Self-similarity, the underlying principle guiding all fractal mathematics, describes the repetition of a sequence or pattern at all levels of observation. In this branch of mathematics, the goal is to discover these complex patterns.

Fractal politics, as an integral aspect of the prevailing social system and in contrast to mathematics, reflects the sociological sensibility that people seek out self-similarity in the form of opinions and worldviews that align with their own identity.

Self-similarity is found at many levels of connection including all forms of (social) media consumption as well as wider combinations of shared and preferred preferences. These are connections that previously would have been mediated through locality, the shared reception of editorial opinion or prior face-to-face associations. Digital, and particularly social media, technologies enable self-similarity to be sought out on a global scale without any prior introductions or context.

Many commentators refer to an “echo chamber” effect (Jamieson and Cappella 2010) to describe the extreme consequences for this desire for association. The consequence itself is popularly and satirically defined by Godwin’s Law (Godwin 2015), “The longer an online thread of discussion continues the increased likelihood that there will be a reference to Nazis”. These are the extremes left unmediated without political hysteresis.

The need for mimetic association (Taussig 1993) can be regarded as the cause for the current state of political opinion. The variety of opinion that this creates then produces alterity and encourages and even accentuates the politics of difference (Taussig 1993). Seeking self-similarity shapes our personal movement of attention from one strange attractor to another and between the events generate.

The significance of events

Where the influence of political events may have previously been given more significant weighting within traditional mediated news reporting, social media presents each events with equal weight within a continuous stream of activity. The significance of each event is not determined by the emphasis placed upon it by commentators or traditional media but in its position within a social media oscillator and the particular bifurcation by which it has been reached.

An individual may claim that they are not “into” politics but should be seen as a response to their understanding of traditional politics. The same individual’s social media oscillations and bifurcations as they choose their engagement with individual events is an act of the politics now facilitated by digital technology.

Political association has always been based on notions of self-similarity and mimesis. What has changed is the much finer degree of granularity that is possible with digital technology. The Labor party in the UK may traditional represent the “working people” but the much smaller Facebook group for ex-employees of BHS is significantly more meaningful to its members and shares equal importance in their digital news stream. In fact, the concerns over “non-Labor” supporters joining the UK Labor party during its leadership contest in 2016 was further evidence that the meaning of association and membership has become a noticeably more fluid concept in the era of fractal politics.

Politics for the Powerful

The new politics brought by digital technology does not necessarily represent the realisation of “people power” or participatory democracy. The manipulation of the event and its use to reflect power back towards the powerful is well understood. It is a tactic still deployed by the powerful including political parties and large companies. What is still underestimated is the equality of the social media stream and the bifurcations of personal social media oscillations that it produces.

This sense (and possibly illusion) of choice may never be precisely knowable but neither is it completely random or impenetrable. The volume, velocity and variety of data that digital technology creates will be where insight is found. Data-driven politics through its closest examination will reveal the patterns and the logic that will explain (at least) the results of the biggest formal and public political events. Politics is possible with digital technology but we are yet to fully completely understand how it now functions in a data-driven, information-rich world.

Albright, D. (2003) ” Tales of the city: applying Situationist social practice to the analysis of the urban drama”, Criticism, Winter.

Beller, J. (2006) The cinematic mode of production : attention economy and the society of the spectacle. Dartmouth College Press, Hanover.

Derrida, J. (1994) Spectres of Marx: State of the Debt, the Work of Mourning and the New International. Routledge: London.

Plant, S. (1997) The most radical gesture: The Situationist International in a postmodern age. Routledge, London.

Rosa, H. (2008) “The Universal underneath the multiple, Social acceleration as a means to understanding modernity”, in V. Schmidt (ed.) Modernity at the beginning of the 21st Century, Cambridge Scholars Press: Newcastle.